Well, I think it’s by now known that Italy has an administrative division of the State through Regions and Commons.
Regions are twenty  – of which five have constitutionally a broader amount of autonomy by special statutes – (the latest typed in the following list) and are:
Liguria, Lombardy, Piedmont, Emilia-Romagna, Veneto, Lazio, Marche, Tuscany, Umbria, Abruzzo, Basilicata, Campania, Calabria, Molise, Puglia (or Apulia) and  Sardinia, Sicily, Trentino-Alto Adige/Südtirol, Aosta Valley and Friuli-Venezia Giulia. Sicily and Sardinia are the main and bigger islands.

Region has an elected parliament, called Consiglio Regionale (Regional Council) or Assemblea Regionale (Regional Assembly); the winning coalition receives the absolute majority of the Council’s seats and the President chairs the Junta, nominates and dismisses its members, called assessori.

The name of Campania itself is derived from Latin, as the Romans knew the region as Campania felix, which can be translated into English as “fertile countryside“.

(pronounced Kampania) is a southern region facing the Tyrrhenian Sea and bordering Lazio to the northwest, Molise to the north, Apulia (Puglia) to the northeast and Basilicata to the east. It has an area of 13,595 sq km and a coastline of 350 km together the isles of Capri, Ischia and Procida and is one of the most populated regions of Italy with about 6 million inhabitants.

In Italy we find two big mountain ranges, Alps and Apennines and while Alps across the northern area horizontally  as borderline  Apennines  goes through the Italian territory vertically from Nord to South in the middle and in Campania –  that is quite hilly – the mountainous interior is fragmented into several massifs, rarely reaching 2,000 metres (Miltetto mount, 2,050 m), while close to the coast rises up the volcanic massifs of Vesuvio (1,277 m) that brings the area to be classifed as a high seismic risk one.

The principal rivers of Campania are Volturno, Garigliano on the border with Lazio, Calore tributary of the Volturno and the Sele. All these rivers have an outlet in the Tyrrhenian Sea. Other courses of water such as the river Ofanto flow in the Adriatic Sea. The territory consists of small lakes next to the coast such as the Lake of Averno that is of volcanic origin, the coastal Fusaro and the Lake of Matese that it is instead of carsica origin.

The climate is typically Mediterranean,  in the coastal band and lowlands is incredibly mild  whereas in the inner zones it is more continental, with lower temperatures in winter, the only places with snow. The region is divided in five provinces: Naples that is the capital, Benevento, Avellino, Caserta and Salerno that are the main cities.

Despite the province of Naples is the smallest province in Campania, it is the most populous and through its high density is one of the most densely populated cities in the world even.

strong>Naples was preeminently the capital city of a kingdom that bore its name from 1282 until 1816: the Kingdom of Naples. Then, in union with Sicily, it became the capital of the Two Sicilies until the unification of Italy in 1861. It was the most bombed Italian city of World War.

For economic strength, Naples is ranked fourth in Italy, after Milan, Rome and Turin. The port of Naples is one of the most important in Europe (the second in the world after the port of Hong Kong for passenger flow) with a big NATO base too. The city was selected to become the headquarters of the European institution Acp/Ue  (African, Caribbean and Pacific Group of States) and as a City of Literature by UNESCO’s Creative Cities Network.

Worldwide the city is synonymous with pizza, with music (romantic guitar,  mandolin, opera and folk standards) whereas some popular characters and figures symbolize Naples as the patron saint of the city Januarius, Pulcinella, and the Sirens from the epic Greek poem the Odyssey.

Neapolitan (napulitano) is the language (dialect) of the city and region also if Campania gets different dialects in others cities all classified as Italo-Dalmatian with pre-Latin Oscan and Greek language influence. However it is quite common for many Neapolitan to speak standard Italian with a “Neapolitan accent” as pronouncing un-stressed vowels, for instance.

The agro-food industry is the main industrial activity in Campania with fruits vegetables and flowers production. Furthermore, Campania is the most Italian producer of nuts and tomatoes but also animal breeding is widespread and the most milk produced is used to process typical products such as mozzarella. Olive trees and good wine production also deserve to be mentioned  whereas craftsmanship plays a very important role in the local activities.

Campania is rich in culture, especially in regards to gastronomy, music, architecture, archeological and ancient sites such as Pompeii, Herculaneum and Paestum. The rich natural sights of Campania make it highly important in the tourism industry, especially along the coast, Mount Vesuvius and the island of Capri. I reserve to write others specific posts about these important topics, subsequently. 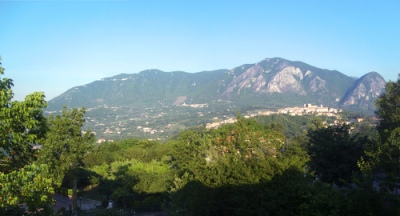