More Champions League Napoli gave Manchester City a reality check by holding the big-spending club to a draw. 40 million euros in the field … and a draw!

Aleksandar Kolarov equalises from a free-kick as Manchester City’s Champions League debut against Napoli ends in a 1-1 draw.
After both teams had hit the bar, Cavani gave the Serie A side a deserved lead after a quick counter-attack midway through the second half at the Etihad Stadium.
But former Lazio defender Kolarov scored with a fine curling effort to earn City, who are second in the Premier League due to goal difference, a point.
Lavezzi also went close with a 25-yard effort shortly.
City hit the bar themselves after their own quick counter-attack, which started with a poorly-struck Marek Hamsik corner.
But Napoli went even closer when Hamsik’s shot from a narrow angle was cleared off the line by Kompany with goalkeeper Joe Hart beaten.
But with 16 minutes remaining Serbian left-back Kolarov curled in a free kick from just outside the area to pull City level.
Kompany almost gifted the visitors a winner when his under-hit back-pass fell for Goran Pandev but Hart was out quickly to block the Napoli forward.
Four decades after former boss Malcolm Allison predicted that City would terrorise Europe only to fall at the first hurdle, the Blues have a second chance to make that boast come true.
City strode on to the biggest stage in club football with the élan and swagger of seasoned performers but they ran into an Italian team that lived up to virtually every stereotype in the football dictionary.
Napoli, making their own debut in the competition and backed by a noisy travelling support, thus went the way of the previous 18 teams that have arrived at the Blues home ground and been sent packing without a victory.
But not before they had threatened the Blues proud home record through Edinson Cavani’s second half effort drilled through the legs of the advancing Joe Hart.
The Italian defiance called for a methodical and careful unstitching but Napoli defended well and counter-attacked with pace and intelligence and can be pleased that their game plan worked.

Here’s some sport newspaper frontpage of this morning. 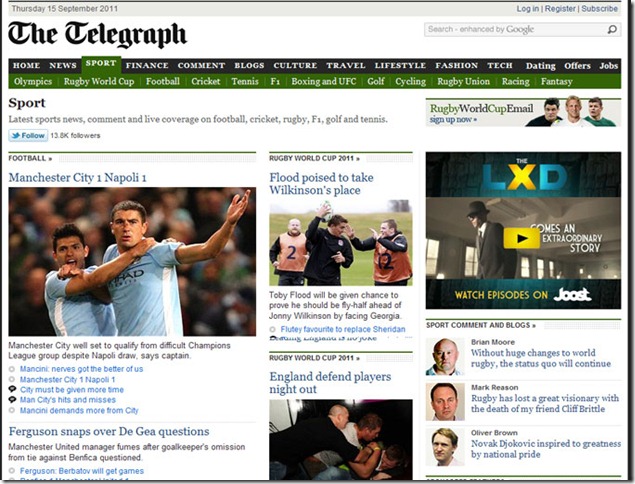