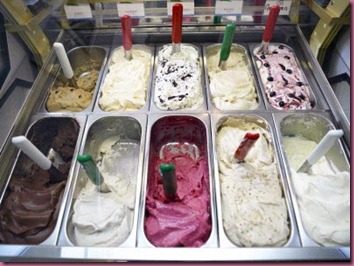 Who doesn’t love ice cream?
In Italy the ice cream is called “gelato” or “cono” and usually every ice cream cone shop or café offers two or three different types of handmade gelato according to the flavors: fruit flavors and cream flavors. Despite from long the category of  “unusual” flavors had been added. For those of you who have tasted authentic Italian gelato you know it is no less than Heaven on a Spoon!
It even was a study conducted by researchers at Kansas State University and published in the Journal of Sensory Studies, on the differences between American and Italian ice creams. In this research were compared fruit, vanilla and chocolate ice creams coming from U.S. and Italian retailers, and it came out that the Italian ice creams have a lower lipid content (4-8% compared with more than 14% of American ice cream ), and a higher content of carbohydrates which is perfectly balanced to obtain an antifreeze effect that prevents the formation of ice crystals too large. In general, the Italian gelato resulted more pleasant for most of its qualitative aspects, both as regards the taste that for its fullness compared to the Americans ice cream. In particular, the Italian fruit ice creams are less bitter and sour, but also less sweet. Unlike, ice cream flavored with vanilla and chocolate were sweeter, most associated with a greater sense of density, and also require less force to compress the morsel between tongue and palate.
Anyway, most of us still are asking for a classic chocolate or pistachio ice cream cone, but to be original or cool we should demand more. The salty ice cream or unimaginable tastes are by now a must in the world, where some renowned chefs compete in rounds of the most curious ingredient. Long ago it made headlines the ice cream Parmesan (Parmiggiano) flavored, then followed by the one with mustard’s taste. Today we find the red beetroot and crab ice cream or the curd goat’s milk. Someone else offers grilled corn or caramel cigar-flavored ice creams. And there’s more, grass and hay, wasaki, white carrot or even olive oil with white pepper taste. The fantasy touches on the bizarre with ice cream to “breast milk and absinthe”, chicken or sanguinaccio (black pudding), and before you turn up your nose or vomiting, we are advised to try them, at least.  Just a tidbit, they say… but, unless the ice cream is not replacing the lunch, because of diet, I personally still prefer a nice handmade ice cream in three traditional flavors: chocolate, hazelnut and cassata…yummy!