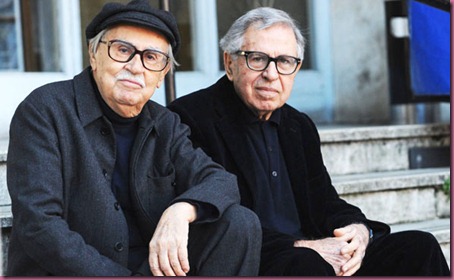 After long and complex discussions, the selection committee, established at ANICA on behalf of the Academy Award, has selected the Italian film that will compete at the Oscars in America. This is the movie ” Cesare deve morire” (Caesar Must Die) directed by the veteran and venerable duo of Paolo and Vittorio Taviani and that was selected over a short list of nine other films announced by ANICA. Thus, the film, that already won the Golden Bear at the Berlin Film Festival, will fly to Hollywood hoping to be in the final, among the five competitors, for the Academy Award for Best Foreign Language Film. Since 1998, after the triumph of Roberto Benigni, only in 2005 an Italian film reached the final.
“Cesare deve morire” is unusual because the cast includes no professional actors, using actual prison inmates. In fact, the movie tells the story of some inmates, at a high-security prison in Rome, preparing for a public performance of Shakespeare’s Julius Caesar. In this film, Taviani brothers explore the complex relationship between life and art where during the preparation of comedy the actors themselves and viewers – many of them mafiosi serving life sentences for murder and drug-related crimes –  frequently comment and talk about their feelings.  Interesting the sentence an inmate confides to another : <Ever since I discovered art, this jail cell has truly become a prison>.
The Hollywood Reporter critic David Rooney, who reviewed this film in Berlin, said: <a stimulating marriage between theater and harsh reality>.
Good luck!