As 50 years ago, on the opening of the Council II, a candlelight vigil in St. Peter’s Square was an opportunity for believers to gather around John XXIII, so this evening a procession started in the late afternoon from Castel Sant’Angelo has arrived in the square San Pietro, in front of Pope Benedict XVI, who this morning kicked off the “Year of the faith”. This morning the pope presided over the Holy Mass  with four hundred celebrants, including eight patriarchs of the Eastern Churches, 80 cardinals and 15 council fathers, in a procession till the Basilica’s churchyard, in St. Peter’s Square crowded with about 20.000 people.
On 11 October 1962, it was a real council “ecumenical” collecting nearly 2,500 between cardinals, patriarchs and Catholic bishops from around the world. On that occasion, in the night of the opening of the second Council, St. Peter’s Square was packed with believers who loudly invited Pope John XXIII to show himself. The pope did it, and he also made a short speech, poetic, sweet, and simple.
At that time I was a child and of that speech I remember just a thought.
But let’s see what the Pope (nicknamed the pope “good”) said while out the window: 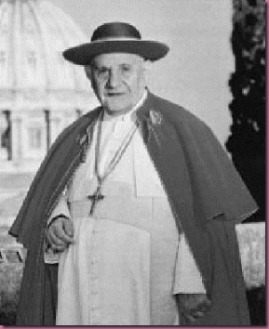 “Dear sons, I hear your voices. Mine is one only, but it sums up all the voices of the world, and here in fact the world is represented. It seems that even the moon hastened tonight … Look at it, watching this show … We close a great day of peace … Yes, of peace: ‘Glory to God and peace to men of good will. If I asked you, if I could ask now to everyone: which side do you come from? The sons of Rome, which are represented here especially, would say: oh, we are the closer sons and you are our bishop. Well,  you sons of Rome, yourself feel really to represent ‘Roma caput mundi’, the capital of the world, as well as for the design of Providence it was called to be it through the centuries. My person counts nothing: it is a brother who speaks to you, a brother became a father for the will of Our Lord … Continue to love each other, to love each other so, so looking at ourselves in the meeting: take what unites us, leave aside , if there is anything that give us a bit of trouble… Going back at home, you will find the children. Give a caress to your children and say, this is the caress of the Pope. You will find perhaps a few tears to dry. Have a word of comfort for those who suffer and say that the Pope is with his sons especially in times of sadness and bitterness… and then all together animate yourself: singing, sighing, crying, but continue to resume our journey always full of trust in Christ that helps us and listening to us. Goodbye, my sons.  To my blessing I also add a good night.”

That “tender” sentence in blue is the one which that night of 11 October 1962 struck me and that I still remember, giving me shivers. Maybe because I was a child and needed a caress, caresses that I never had.
Please, give to your child a caress now and say, this is a caress that the good Pope, from there, sent to you.

HOW LONG SHOULD SEXUAL INTERCOURSE LAST FOR

It is  said that in our bedroom we can do what we wants. What happens in bed is something strictly private, especially if we refer to sex.  But, although we are not all the same, I think that what happens in bed not differentiate each other so much. Perhaps we are more different at the table or in dressing.  Apart from some special cases, most men do the same things when in bed with a partner, during a sexual intercourse. Beside, the average sex time is not as long as you’d think.
Tenderness, hugging, foreplay and then… the coitus, without or with some short break if he wants a longer intercourse.
Since the variables are different, it is not easy to establish an average in duration, although some statistics tell us that we are in a range between 15-30 minutes. But if we take into consideration only the duration of the copulation, excluding any other variable, even foreplay, then the statistics and polls become more precise and reliable.
According to a new study called “Canadian and American Sex Therapists’ Perceptions of Normal and Abnormal Ejaculatory Latencies“, a coitus lasts anywhere from three to seven minutes. This is as a physiological factor.
This data corresponds closely to other studies, which put the average of the pure intercourse at five to seven minutes. Few people have intercourse that goes longer than 10 minutes.
Differently from popular fantasy about the need for hours of sexual activity…or about some men pretending pretentiously to be as a train’s long-ride with no stop.
Men who are able to have a double ejaculation with no “recovery time” or  physiological pause, so that they can carry on the sexual act without stopping, can be counted on fingertips. After ejaculation, the recovery time after which every man is again able to excite and have a new erection, varies from person to person and can range from a 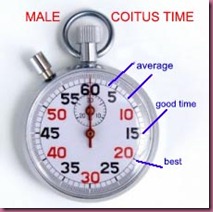 few minutes to many… many hours.

Unfortunately, today’s popular culture has reinforced stereotypes about sexual activity. Many men and women seem to believe the fantasy model of large penises, rock-hard erections and all-night-long intercourse… absurd.
Luckily, if a guy is concerned about how long intercourse should last, these data reassure him and avert the thought of some physical disorders.
On Wikipedia, under the voice “Sexual intercourse”, we can read “Intercourse ends when the man has ejaculated…. Masters and Johnson found that men took about 4 minutes to reach orgasm with their partners while women took about 10–20 minutes to reach orgasm…. In 1991 the Kinsey Institute stated, “The truth is that the appropriate length for intercourse is the length of time it takes for both partners to be mutually satisfied”.
This means that it is useless, if not even annoying, if sexual intercourse lasts much longer than woman’s needs to be satisfied. Many studious consider a time of 20 min. the most appropriate for most women. It is supposed that you know your partner’s needs and you should try to adapt yourself to her.
Those who want to reach a long ‘screw’, beyond foreplay or various break, must understand that sex is done with the head before it by their body. Therefore they must control their behavior and emotions. A simple way to do this is to divert the mind when they feel that “their time” is about to expire… before the ejaculation arrives. Although quite unromantic, they need to think about things that are so important to overpower and take precedence over the sweet and pleasant sensations that sex is giving them on that moment. I do not know now, but think about bills, bickering with the boss or to the poor state of health of a family member, for example. It requires only a minute, the right time to “cool the ardor” without losing  the erection or the wish to go on. If you are able you can repeat, after some time, this gimmick. Someone also finds useful slowing down through very small-pauses, switching positions and varying the speed and pattern of his thrusts. By these simple gimmicks and adding 10 min. (as average) for prior foreplay, most guys can get a satisfying

I forgot to say that the “time” or “duration” of which we are speaking about, also depends on the age of the person. In general, the stimulus, the sensitivity of the penis, as the reaction times decrease with age, and this involves a small increase in the time required to achieve ejaculation. As a middle-aged person, I now can confirm that this statement is true and made me happy because I have never liked foreplay and my partner had to make do with my “to-and-fro” never higher than 15 min. From long, with no ploy, I can reach the half-hour.
About glans, those who suffer from premature ejaculation, since youth and who are not circumcised, could receive a benefit accustoming themselves to keep the penis constantly “open” (with the foreskin pulled up) in their briefs. Over time, the glans slowly will lose in sensitivity.