Berlusconi’s future as an ordinary citizen 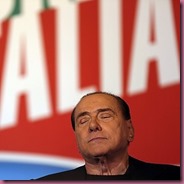 From Wednesday, November 27 , Silvio Berlusconi is no longer a member of the Italian Republic. The Senate decided so by voting in favor of his decadence, as prescribed by judgment after the trial of broadcast Mediaset’s rights, owned by Berlusconi. What does happen or should happen after this judgment?

The severance pay and pension
The loss of Senator’s office does not prevent a member to receive the money due as provided for every Italian parliamentarian who leaves after two years. In Berlusconi’s case it is a severance payment of € 160 thousand and a pension of 8000 € per month. (Damn! So much for the crisis and sacrifices that are continually being asked to nationals!)

Political freedom
Berlusconi can continue his political activity, but he can’t present his candidacy, and needs a permission to leave his city. Consistent with this, he can have talk in and lead his party.

The investigations and processes
The final sentence in the Mediaset process has not concluded Berlusconi’s legal problems. In addition to the judgment about Ruby trial, there is the issue of the senator’s sales of and the likely process for bribery of witnesses. Now, for the prosecution will be easier to arrange interception against the ex senator.

Disqualification for public office
In a few months the Supreme Court has to confirm the ban to access to any public studio, for a period of two years. It means that Berlusconi cannot vote, cannot be elected, cannot perform any public office, and he will also lose all titles and honors received.

The Detention
Not having any parliamentary shield, the former minister now is a citizen like any other. When one of the prosecutors who is investigating on him decides for a preventive arrest, now there will be no benefit to protect him (in effect, the Parliament must vote to allow the arrest of a deputy or senator). This just is the eventual scenario that terrifies Berlusconi.

The social services
Berlusconi has chosen to avoid the house arrest applying for social services, in order to have more freedom. A penalty that will last 12 months (but probably will be discounted to 9 /10). He will begin it in the early months of 2014, perhaps on April; since then, every day, he will have to spend some time in the body/authority that he has chosen.

Freedom of movement
When he begins serving his sentence, Mr. Berlusconi may not leave his home between 11 and 6 pm and he cannot go abroad (his passport has been confiscated). All things that will complicate his political activity although he has vowed that he never will give up.

I have already mentioned something about this in the past, but considering that during Christmas, dried fruit becomes a common food that is often found on Neapolitans’ tables, it is worth saying something more.
Preparation and use of dried fruit dates back to ancient times, when fruits and seeds available during the fall, such as walnuts, chestnuts, hazelnuts, were dried or cooked to preserve and eat them during the long and poor winter months, when most fruits and vegetables were lacking. Although nowadays the dried fruits are available throughout the year, thanks to the food industries that sell them packaged, in Naples, during the Christmas period, all grocery stores and supermarkets sell different dried fruits because Neapolitans, from time immemorial, are accustomed to eat them after lunch, during these holidays.

Munching walnuts or cracking some hazelnuts’ shells is considered almost as a pastime for Neapolitan’s families, so that they all together stay a little longer at the table during lunch or dinner.
Although in the past these foods were not as expensive as they are today, the dried fruit that we usually buy during this period are:

Hazelnuts
roasted with their shells that costs 2-4 euro per kilo.

Chestnuts
called “Priest’s chestnuts” (probably because in the past they were the monks who prepared and preserved them for the winter). I do not know exactly what is their method of preparation, but despite dry, these chestnuts are very tasty, fragrant and soft  Probably they are steamed, a way to enhance taste and smell. They cost 14-16 euro per kilo.
Almonds
roasted with their shell.