Next Tuesday is Carnival here.
Although present in the Catholic tradition, the characters of the celebration of the Carnival festivities have origins in ancient times, such as the Greek Dionysian  or Roman Saturnalia. During the Saturnalia and Dionysian festivals was achieved a temporary dissolution by social obligations and hierarchies to leave room for subversion, for joke and even debauchery. From a historical point of view and religious carnival represented, therefore, a time of celebration but also of symbolic renewal. During these celebrations the social order was overturned: the slaves, for example, could be considered temporarily free men.

In Italy, one of the typical Carnival sweets are  the “Chiacchiere”. They are made with a mixture of flour that is fried or baked, then dusted with a lot of powdered sugar. This snack is known by different names in different Italian regions, like “bugie” in Genoa and Turin, “cenci” in Tuscany, “frappe”  in Viterbo,” sfrappole” in Bologna, “galani”  in Venice, but “CHIACCHIERE”  in Lazio, Campania and Sicily. This term could be translated as chatter, chitchat, babble and the origin of this word is to be found in antiquity. It is said that

during the Liberalia, Roman festivals in honor of deities of fertility, rural elderly women with head encircled with ivy sold on the street a sort of sweet pizzas, fried with honey to offer to the gods. The celebration on March 17th was meant to honor Liber Pater, an ancient god of fertility and wine (like Bacchus, the Roman version of the Greek god, Dionysus). Liber Pater is also a vegetation god, responsible for protecting seed. Liber, again like Dionysius, had female priests although Liber’s priests were older women. The word Liberalia probably derives from the fact

that on that day traditionally this feast also celebrated the maturation of young boys to manhood (puer), with all the rights and duties of a Roman citizen. Roman boys, usually at age 14, would remove the bulla praetexta, a hollow charm of gold or leather, which parents placed about the necks of children to ward off evil spirits, and wore toga libera or virilis. At the Liberalia ceremony the young men might place the bulla on an altar (with a lock of hair or the stubble of his first shave placed inside) and dedicate it to the Lares, who were gods of the household and family. Over time this feast evolved and included the goddess Libera, Liber Pater’s consort, and the feast divided so that Liber governed the male seed and Libera the female. This ancient Italian ceremony was a country or rustic ceremony. The processional featured a large phallus 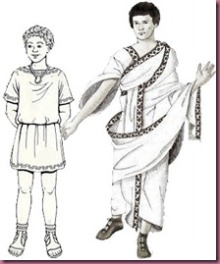 which the devotees carried throughout the countryside to bring the blessing of fertility to the land and people. The procession and the phallus were meant also to protect the crops from evil. At the end of the  procession, a virtuous and respected matron placed a wreath upon the phallus, to cover it.
Furthermore, it seems that the “chiacchiere” were similar to the ‘frictilia’, fried in pork fat, which the ancient Romans consumed en masse just in times of Saturnalia’s feast. During the festivities they were distributed to the crowd in mass poured on the streets. Thanks to the ease of their preparation it was possible to fry in large quantities and in a short time, since they had to last for the entire period of Lent.
The recipe is not complicated and those who want to try their hand at preparing the chiacchiere of Carnival will not be disappointed.

1 Put the flour on a pastry board, giving it the shape of a fountain.

2 Place in the centre the eggs, suet, sugar, baking powder, vanilla and the liqueur.

3 Mix the ingredients well until the mixture is smooth, elastic and homogeneous. If the dough is too tough add water.

4 Form a ball, wrap in plastic wrap and let rest for 1 hour in a cool place.

5 With the help of a rolling pin or a pasta machine, roll out the dough into a very thin sheet.

6 Fold the dough several times, going back to lay down. This will give a smooth and uniform.

7 Cut, obtaining rectangles (more long than large) with the wheel to the pasta and cut at the middle of each of them. Pass the corner of each rectangle inside the incision and gently pull, like trying to roll, it will form a kind of knot. This step can be avoided if you are not able to do it. You also can cut them as long stripes (10 x2 cm).

browning on both sides.

9 Put them to drain on absorbent paper and, once dry, put in a container and sprinkle with a lot of icing sugar.

Although these pancakes can be eaten so, we usually serve them with the liquid chocolate…. ..yummy!