Life and death in Pompeii and Herculaneum

It is the daily life of Pompeii and its near neighbour Herculaneum before the disaster that is the subject of the British Museum’s latest exhibition.
In fact, the British Museum in London is hosting its first ever exhibition on the Roman cities of Pompeii and Herculaneum sponsored by Goldman Sachs.
Titled “Life and Death in Pompeii and Herculaneum“, with a unique focus to give a taste of the everyday life of the people in Pompeii, the exhibition will display 450 artifacts on loan from the Superintendence of Naples, until the end of September 2013, of whom some had never left Naples and which have never been seen outside Italy before.

AD 79. In just 24 hours, two countries in the Bay of Naples, southern Italy, were buried by a catastrophic eruption of Mount Vesuvius. Preserved under ash, their rediscovery nearly 1,700 years later provided an unparalleled glimpse into the daily life of the Roman Empire.

In spite of the desolation that met the eyes of those who witnessed the aftermath of the eruption of Vesuvius, much was wrested from those ruins more than a millennium and a half later, and much continues to be found to this day – as recently as 1992, for example, 300 hundred bodies were excavated from the shore line close to Herculaneum. The volcanic ash had acted as a terrible preservative of sorts. Pompeii was said to have had a population of about 15,000, and only 10 per cent of those bodies were ever accounted for. Some must have fled, taking whatever was most precious to them – beside the felled body of a soldier we stare at a long sword, a stabbing dagger and a bag of tools. Others took with them a wicker basket heaped with bronze coins or the key to a house that would never be seen again.

The exhibition organizers have created a journey through time, with images of tranquil daily life in the ancient Roman cities that today are blended with the bustle of the city of Naples.
With over 20 years since the last major exhibition on Pompeii in the UK, recent discoveries alongside celebrated objects, including body casts, will reveal new insights into this highly captivating and human

story.
Starting with the bustling street, and moving through the intimate spaces of a home, the visitor will be transported into the lives of ordinary Romans nearly 2,000 years ago, before devastation struck. From the atrium to the garden, bedroom and dining room, this personal journey reveals parallels with our own lives today.

The presentation is systematic, and after seen common daily life objects, artworks, jewels and paintings,  the tragedy comes. You can see her, in a low-lit area on her own, flung down onto her face, helplessly sprawled in death, the Resin Lady, so called because the void of the body left in ash was filled with clear epoxy resin. This woman died in the basement of a villa near Pompeii. A little way away, among the most striking findings come down to London, is an entire family that died together in positions of pain and terror, braced against the hellish heat, huddled in an alcove under the stairs of their house. A child is on its mother’s lap. Mother and father appear to be falling backwards, reeling from the tremendous blast of heat. A child lies in the boxer pose – which means that its tendons would have

contracted because of the searing temperatures. 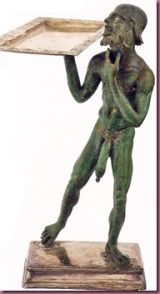 were not ashamed of their bodies and not embarrassed about sex, differently from the British of today, who have placed a kind of signal “unsuitable for children” in front of the statue of the god Pan that mates with a goat.

Statues, garden furniture, food moulds, even a mosaic warning sign reading “Cave canem” (beware of the dog) placed at the entrance of Orpheus home in Pompeii, are indicators of just how much the average person loved their stuff.
Of course, watching all the ruins of Pompeii and Herculaneum closely on site is a different story, and I can understand that this is better than nothing for British who can not or do not want to travel and come to Naples, but it becomes inconceivable to me that other people – non-resident in UK – will have decided to travel to go to London to enjoy this small exhibition, rather than come in Pompeii.

The more than 5,000 exhibits collected by Elisabeth and Rudolf Leopold (art collectors) over five decades were consolidated in 2001, with the assistance of the Republic of Austria and the National Bank of Austria, into the Leopold Museum Private Foundation, when the Museum opened.
Today, the Leopold Museum, housed in the Museumsquartier in Vienna, is home to one of the largest collections of modern Austrian art, featuring artists such as Gustav Klimt, Oskar Kokoschka, Richard Gerstl, and with the world’s largest Egon Schiele collection.

Since autumn of 2012, with the presentation “Nackte Männer” (“Naked Men”), a long overdue exhibition by the Austrian artist  Ilse Haider, the museum is exhibiting diverse and changing depictions of naked men from 1800 to the present.
Thanks to loans from all over Europe, this exhibition offers an unprecedented overview of the depiction of male nudes, starting with the period of Enlightenment in the 18th century. The presentation focuses mainly on the time around 1800, on tendencies of Salon Art, as well as on art around 1900 and after 1945. At the same time, the exhibition also displays important reference works from ancient Egypt, examples of Greek vase painting and works of the Renaissance. Spanning two centuries, the presentation shows different artistic approaches to the subject, competing ideas of the ideal male model as well as changes in the concept of beauty, body image and values. The exhibition brings together nearly 300 works by almost 100 artists from Europe and the USA.

Due to striking success, the exhibition, meant to close on 21st January, was extended through 24 March 2013 and the museum also invited several nudist associations to come and spend an evening undressed in the museum. Life imitating art! The 18 February was chosen for this atypical evening with aficionados of naturism, so no need to do it behind closed doors, at least!
Below some picture of the exposition, if you want see them.

Of course, such a show could not pass unnoticed by inevitable moralists on duty and prudish people.
The promotional poster, featuring a photo called ‘Vive La France’ by French artists Pierre & Gille, and depicting three naked players stood on a pitch under a shower of confetti, immediately was censored after a series of complaints. The organizers agreed to cover up their privates, but in the absence of other, I thought they would have the balls to stand their ground.
Days before its debut, the visual advertisement made by a 13-foot full-frontal photo sculpture of a reclining naked man (called Mr. Big, by  Ilse Haider),  part of the provocative campaign to tease the launch of the exhibition, also was criticized. 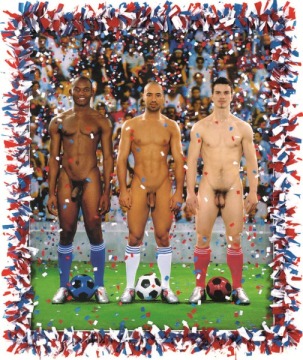 Although the exhibition has caused considerable local controversy, it should get a positive judgment since until today, exhibitions on the subject “nudity” have dealt primarily with images of female nudes, while male nude, unlike ancient times, still is viewed with suspicion and considered more obscene than the female. Female nudes that radically overpower their male counterparts in most museums. Recently, the so-called “weenie counts”, conducted around the Metropolitan Museum of Art in New York, found that only 15% of nude forms in the museum were male. What’s the deal?  An inexplicable human race’s contradiction, probably due to the evolution and civilization that anyhow makes no sense. 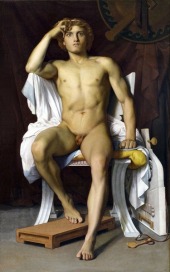 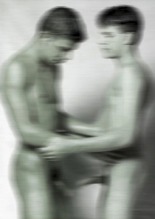 Also this year the “Sanremo Song Festival” got the start yesterday night, the famous Italian song festival which sees the competition among some acclaimed Italian singers (Big) together some new talents (Rookie).
Sanremo, the city of flowers, in the past years gave at the festival a lot of bouquets for the scene design, but this tradition has slowly weakened and now the stage is completely devoid of flowers.
Since the artistic direction of the program is entrusted to the conductor, each year there are changes and additions to the anchorman himself.
This year, the presenters of the festival are a couple who for years is presenting a famous cultural program on one of the national network, called “Che tempo fà“, Fabio Fazio and Luciana Litizzetto, who also is a comedian and a writer.
Many novelties this year, five instalments, and during the first one the Big have proposed two new songs and at the same time the verdict, resulting by spectators and a jury of quality’s votes, chose which of the two songs had to continue the race. 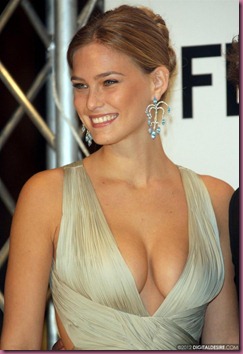 Seven singers in the first night and seven in the second, and also this year there are international guests such as the supermodel Bar Rafaeli, Asaf Avidan, Carla Bruni, Antony & The Johnsons, Andrea Bocelli and the dancer Lutz Foster, aside from some Italian celebrity.
In the third live-kermesse,  the 8 rookies will perform with an direct vote by public and jury that must choose songs that pass the turn.
The fourth night is dedicated to the history of the Festival of Sanremo during which each of the Big will sing an old song (out of race) that has made the history of these 63 years of the festival, and during the show also will be decreed, by 50% televoting and 50 % of the jury’s votes, the winner among the debuting singers still in the race.
The 14 Big will perform again Saturday night (February 16), the last show day, when the winning song for this 2013 edition of the Sanremo Festival will be chosen.

“Canstructions”
One Can Make a Difference

Every year in many cities of the USA and Canada is held an international competition among engineers, architects, contractors and students who realizes (in team) the best “Canstruction“, the most spectacular and giant construction created with cans or small containers of food. The competition is called ‘NYC Design and Build competition’ and for humanitarian purposes as the necessary equipment is donated by the “Food Bank of New York City“, while all the cans and the proceeds of the exhibition is then donated to charity (via http://www.cityharvest.org). I do not know the year of participation of each work shown here, but they are among the most beautiful ones who participated in the various events which took place over several years in different locations. 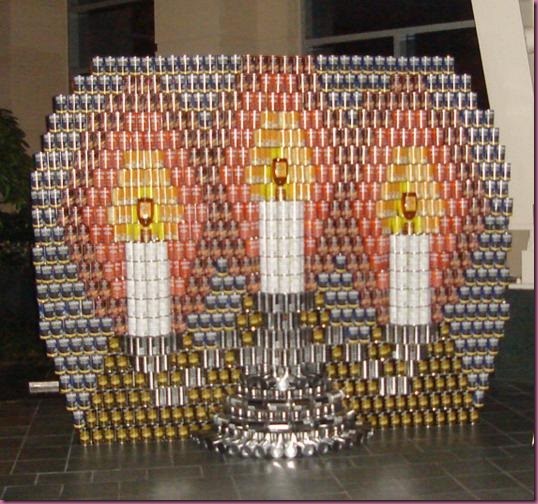 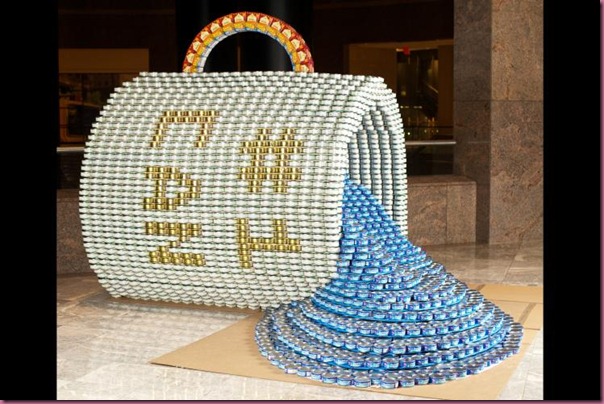 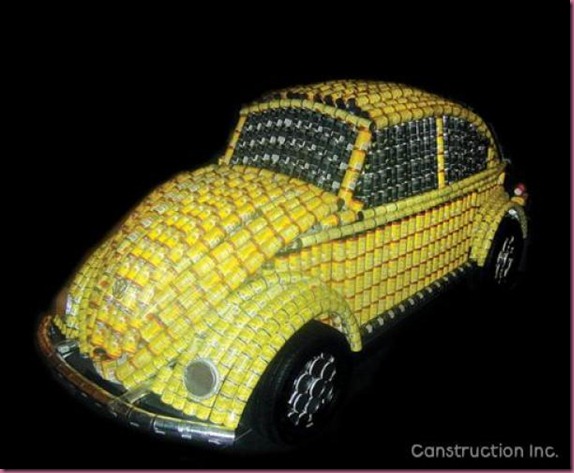 For the opening soirée of the first Salon du Chocolat in Zurich, on Thursday evening, renowned chocolatiers and pastry chefs applied their skills to create unique dresses made of chocolate.  The Maitres Chocolatiers came from Belgium, Switzerland and France.
Great applause for French chocolatier Jean-Claude Jeanson and designer Mister Crochet for their original creation, a flamboyant bird’s nest with three real pigeons inside. Besides, the model’s long legs were covered with white chocolate tattoos. The hairdresser Valentino finished the last touches of their model on stage.
Geneva-based chocolatier Philippe Pascoët worked together with Swiss designer Elisa Sue to create a Baroque style gown, while Choc-master Philippe Bel, based in Lyon, mixed confectionary and chocolate for a sensual brassiere made with a combination of dark and milk chocolate and marshmallows.
I believe that each of us, looking at those attractive models, would say: “I could eat you whole!”
The show will be in other cities during the upcoming months:
•    Bahia from July 6th to 8th
•    Paris from Oct 31st to Nov 4th
•    New York from Nov 9th to 11th
•    Lyon from Nov 16th to 18th
•    Cannes from Nov 23d to 25th
•    Cairo in November (dates to be announced)
•    Moscow in December (dates to be announced)
•    Shanghai at the end of 2012 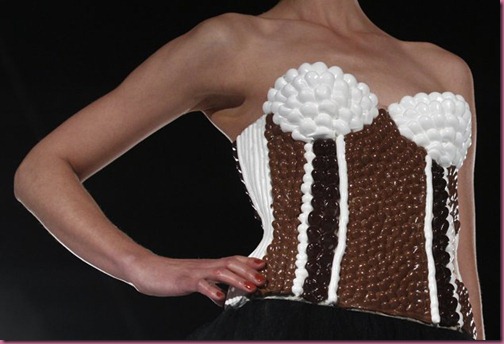 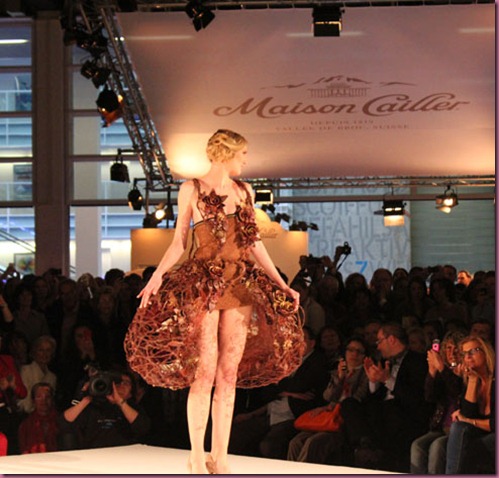 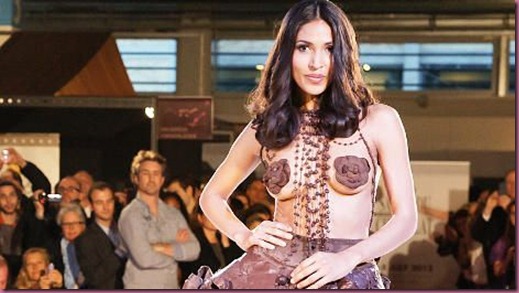 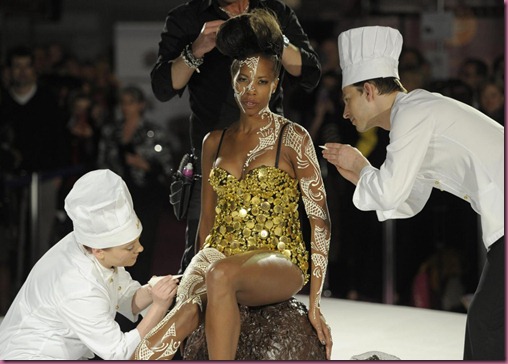